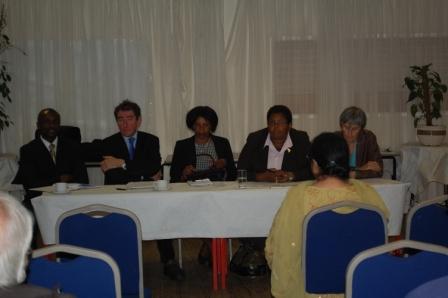 The Commission’s approach as applied to FTiL

The co-operative approach is fundamentally about ‘a new approach to public service delivery’. The public service that FTiL delivers is 'fostering constructive relationships among faith communities and promoting faith and multi-faith involvement in civic life'.

Of particular relevance to FTiL is the word 'diverse' in the vision phrase on page 4 of the White Paper and the reference to 'mixed and sustainable communities' among the long-term outcomes. It was considerations of this kind that led the Council to support the formation of FTiL in 2008 and its capacity building during its first two years. The rationale for such support is as strong now as it was before.

With reference to the 5 revised principles on pages 19 and 20 of the Commission’s Report:

It appears that FTiL, newly established in recent years, already embodies a number of the ways of working to which the Co-operative Council aspires, and that FTiL as it evolves can readily become an integral part of a co-operative borough. FTiL is a third sector organisation that has organised itself to provide a specific service and it is deeply involved in the design and delivery of that service. As stated in para 5.3 of the Report, “The council has a role in ensuring these groups grow and flourish and should therefore provide practical support …. where possible …”.

Among the range of FTiL’s activities, the strand concerning faith based services for young people is of special relevance as we seek to build towards a co-operative borough. The overall aim is to break down stereotyping and prejudice among young people. In 2009/10, FTiL commissioned work to map the activities provided by faith communities for young people in Lambeth, and this is to be further extended. Now in 2010/11 the mapping work is providing a basis for work to establish a faith-based Youth Forum in the Borough. In 2011/12 and beyond the Youth Forum could be the vehicle for creating events and activities to foster constructive relationships among young people from different faiths. Funding estimated at £15.000 would be required in 2011/12. Funding of £5000 from Council sources to support this strand of work is suggested as appropriate.